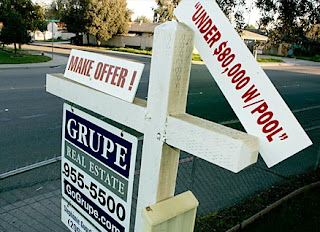 Information on statistics of percentage increased and/or decreased is taken from MSN money article here . Analysis and thoughts are mine.

7 things that are getting cheaper:

1. Homes
Although not quite so cheap, house prices have fallen way down in many part of the country, leaving many home owners upside down in their mortgages.

2. Electronics
Electronic gadgets such as flat screen TV, DVD players, camcorders and camera, computer seemed to be getting smaller and cheaper.

3. Clothing
Prices of cheaply made clothes have decreased so much. Many people have to replace their not so well made clothes almost every year. I doubt that it is cost effective in long run.

4. Cars
With recent program "Cash for clunkers" success, car prices seems to be down and making many people believe they can afford newer model of car, and prices of used cars have plunged even more.

5. Air fare
Air fare have decreased but additional fees for baggage, food, seat selections have increased. So it actually makes illusion of reduced  price while actual total prices have increased for flying. I even heard that Ryan air planning to make coin operated restrooms!! I am not sure that will go well with most of the travelers.

7.  Toys
Cheaply made plastic toys prices have decreased significantly. However, there are still outrageously priced toys sold in a store such as $200 robotic dinosaur, which can move and roar, does our children need that at all? I think not.

7 things are getting expensive

1. Food/Groceries
Prices of staple food such as corn, rice and wheat have increased so much that many poor people in mexico and iraq and other developing countries can barely feed themselves.

2. Medical care
Despite the health care overhaul, prices of medical care and hospital stay have increased, even before recession began. Some of the service have increased  to over 84%  in last 10 year since 1999.

3. College education
College tuition have increased to almost 30% since 2006 to 2009. Many middle class parents can barely afford to send their kids to college now.

4. Gas prices
Gas prices always fluctuates, lower during election time and higher during summer and Christmas holiday vacation time. But it has increased over 6% in a few months time period and that is a lot.

5. Garbage/Water/Utility
In our area price of garbage collection and water usage have increased. There is proposed Utility increase again since last increase in 2005. There are no lower rates for people like us, who compost and have only 2 small bags of trash every week. Rain water collection is also not legal without a permit, in many area too.

6. Beer/Alcohol
Another great reason to give up drinking, raising prices of alcoholic beverages. Enough said.

7. Prescription drugs
Price of prescription drugs have increased over 200% since 1990, who knew? I think even with generic prescription price is still going to be high. It is not so great news for people who are on daily or monthly medication plan such as diabetes or cancer.

What did you think? I would love to what has increased or decreased price wise in your area.

Excellent post, Zengirl, and a thought-provoking one. I've certainly noticed grocery prices in my area rising sharply, and even stuff like dog food costs much more today than it did a little over a year ago. Those with businesses pass on their costs to consumers-- our vet, for instance, has raised her rates quite a bit, which is a big blow given that we have five pets at home. Meanwhile, middle class salaried folks have been asked to take pay cuts or downsized and we have to stretch our dollars even further to pay for basic necessities.

Good post! When you think about it, the consumers, us, have tremendous power that we're not utilizing. There are more of us who buy necessities than stores who sell them. We are poised to wield serious clout to drive prices down if we get organized. Whether or not that will happen in our lifetime, we shall see.

Vaishali,
It is so true, life for most of us gotten expensive from food, utility, gas prices, rent, medicine, education and so on. It simply does not make sense, how is poor folks can survive it! In good economic time, people are still living on borrowed money, i.e. credit card.

Belinda:
Thanks for posting your comments and stopping by. You are right, we as a people have lot of power together, if we all do it together, but most of us living such a hurried and isolated life, I am doubtful that it will happen in our life time. Let's see. There is still lot of frugality in people's mind, so there is a hope. :-)